Welcome to the SillyCar News Page!

This is the home for all news related to anything SillyCar!

Click on the wheel to the left to return to the SillyCar hub!

Click the links below the hub for older or other news items.

February 15th, 2009 - Well, the news page is moving... again. I have not updated this page as often as I would like, so I'm trying a new, blog style news page which you can access by clicking here. This page will be maintained for nostalgia...

June 29th, 2008 - The Kid's photo pages have finally been updated! I have combined Grace and Jacks' photo pages into one Glastetter Family album! Click here to check it out!

April 5th, 2008 - SillyCar Design posted a new client website to the internet today! JustinBuilders.com is now live! Check it out! Also, In music news, King's X has released a new studio album entitled XV! It rocks the house! Check it out at their website!

March 27th, 2008 - A new interface for the arcade pages has been posted to the arcade section of my website! Click Here to check it out. It will still be a long time before it's complete, but I wanted to post something so that it at least looks like i'm trying...

May 6th, 2007 - I broke my leg today! Playing soccer in Scotia. Well, over 36 years with no broken bones was a pretty good run!

December 29th , 2006 - Jack Thomas Glastetter was born today at 5:34 pm! He weighed 7lbs. 11oz. and was 20 inches long! Both Jack and Melissa did great! Both of them are very healthy and happy. Grace was dissapointed that Jack was not a girl like she wanted, but she quickly got over that when she met him! Not to be outdone by his big sister, Jack has made his own website and is now part of the hub on the SillyCar website! Click the image below to go to the SillyCar Hub page, or Click here to go directly to his new website! 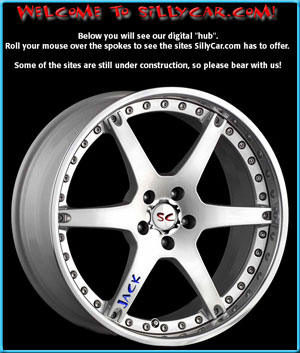 November 2006 - I have been working on the Arcade pages quite a bit lately. This is a massive project and will take a while, but I hope to have enough to post the pages soon and complete them at a later time... Also, I am finishing a room in my basement that will become the new SillyCar music studio. This will keep my gear safe from the children and hopefully give me a place to go and actually get some music done!

August 26, 2006 - It's been a long time since I updated this page! Nobody reads this crap anyway though, right? Anyway, Melissa is pregnant for those of you who don't know. She is due on January 7th. Also, Dave and Kendra had their second baby recently. Brady Kenneth Glastetter was born on August 11th! He weighed 9lbs 3ozs. There are some pictures of him in the august section of Grace's photo site. Also, Grace broke her arm on the 23rd. Her and Uncle Matt were playing tug of war and she lost! She has a nice pink cast though and will be just fine.

In Music News, Mark Huzar and John Michaud (of Amid The Ruins) have launched a new website along with bass player Jarrod Williams for their new power trio Tore Down House! Check out the website by clicking here. You can listen to music, sign the guest book and read about the band. They are going to be huge!!!!

I have not worked on the album much this year. Work has been very busy and so has being married with a young child and owning a house. But I have been listening to some great music. Some of my most recent favorites are Enchant, Kelly Clarkson, and Office of Strategic Influence.

February 16, 2005 - Nickolas David Glastetter was born today at 9:17pm! He weighed 6lbs 15ozs and was 21 inches long. You can see some pictures of him by Clicking here. Soon we will be adding a Nickolas page to SillyCar.com, so keep your eyes peeled...

November 2, 2004 - Recording has begun on my new solo album! I have layed down the basic tracks for the first song. I will be polishing it up when I get a chance. I'm very excited about this new recording. I have been itching to start it for a long time. Hopefully it will turn out good. I have asked some guest musicians to appear on this album as well. Keep checking back for future news posts about who they are!

October 14, 2004 - The new SillyCar Design website is now up and running. What a bear this project is becoming. If you're reading this, and you know of someone who might need website, graphic design or wedding video services, please point them to SillyCar Design. Thanks.

Still trying to get to the update to Grace Olivia.com and have begun a new issue of the iNews newsletter which will be emailed to everyone on the list by November 1.

October 5, 2004 - The new SillyCar Hub interface for SillyCar.com is now completed! I am hoping to get some new pictures on Grace Olivia.com soon. She is growing up so fast.

Also, I have upgraded my recording software on my new emac. I am now running Mark of the Unicorn's Audio Desk 2 for Macintosh OSX! I am hoping to have some material recorded soon...